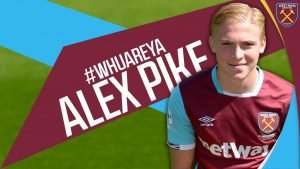 West Ham has confirmed that youngster Alex Pike has had his contract terminated by mutual consent.

Pike joined the Hammers as an U11 midfielder before being converted to a right-back as a schoolboy. He made his  U18 debut while still an U16 schoolboy at home to Spurs on 12 January 2013.

He was scouted by West Ham Head of Academy recruitment Dave Hunt who watched him play in the Echo Premier League playing for Buckhurst Hill FC.

The 21-year-old defender leaves the Hammers after eleven years in the Academy, during which he made his sole first-team appearance in a UEFA Europa League third qualifying round defeat at Romanians Astra Giurgiu in August 2015.

Pike, who spent time on loan at League Two club Cheltenham Town in early 2017, featured more than 50 times for West Ham at U23 level. West Ham United say would like to thank Alex for his efforts and wish him well in his future career.