Conor Coventry is in the January firing line and could leave West Ham when the transfer window opens.

The Hammers midfielder has been in the senior squad for the 2022/23 season but has struggled to force his way into David Moyes’ plans. 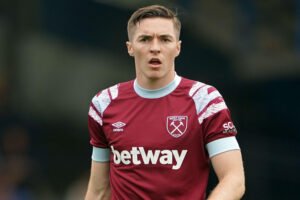 Coventry has only played a single minute of Premier League football this season, coming off the bench against Manchester City when the game was already lost, although he did start the final two Europa Conference League group games.

There is a feeling at the club that Coventry may be more suited to Championship football but, at the age of 22, another loan is seen as unlikely.

His contract runs until 2023 and the Hammers would rather receive a fee for the player than lose him for nothing.

He has gone on loan to MK Dons, Peterborough United, and Lincoln City, and he has barely had a chance to prove his worth in the first-team at the London Stadium.