Hammer is surplus to requirments 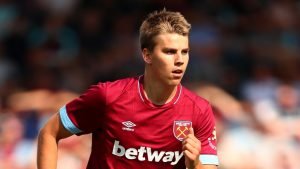 Hammer Martin Samuelsen is reported to be surplus to requirements looking to find a permanent move for the 22-year-old.

The West Ham winger joined Haugesund in his home town in Norway last February on a loan until the end of the year.

Haugesund sporting director Opedal has admitted that the club wanted to keep Samuelsen on loan, but were told he must return.

Opedal thanked Samuelsen for his services this year before conceding that the Norwegian winger’s career will now continue elsewhere.

Samuelson has just six months remaining on his West Ham contract and the club are said to be keen to move his £8,000 per week salary off their wage bill.

According to the Hull Daily Mail   Hull City are one of the clubs hoping to buy the player for a nominal fee in the January transfer window.

The Norway international initially moved to English football with Manchester City at the age of 15.

The winger then moved to West Ham United at 18, making his first-team debut in a UEFA Europa League qualifying match against Maltese club Birkirkara at the Boleyn Ground in July 2015. Since then, he has been capped at senior level by Norway and been loaned to EFL clubs Peterborough United, Blackburn Rovers and Burton Albion and Dutch Eredivisie outfit VVV-Venlo.

4 comments on “Hammer is surplus to requirments”