Hammer knocked out in serious injury 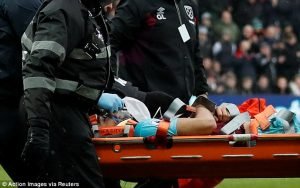 Winston Reid picked up a serious injury on Saturday that could see the defender out for the remainder of the season. The centre-back overextended his knee was also knocked out unconscious during a first-half incident at the Liberty Stadium.

TV replays showed Reid’s foot appeared to lodge in the ground and he remained on the deck motionless for some time.The play was held up for ten minutes as medical staff put his neck in a brace before carrying the player off the pitch on a stretcher. After leaving the pitch, Winston was taken to a local hospital for a scan.

Post game David Moyes said: ‘Winston Reid is conscious, he was knocked out, we are more worried about the injury to his knee than the knock to his head. He’s an important player for us so we hope it’s not too bad.”

← This disease needs to be removed from our great club
Video: David Moyes post match reaction →
Click Here for Comments >