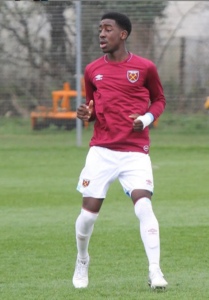 West Ham U18 promising left-back Joshua Wilson-Esbrand is set to leave the Hammers for Manchester City Academy. The 16-year-old made his Under-18s debut in March 2018 against Spurs and made 15 appearances last season for the U18’s while on a two-year scholarship with the Hammers Academy.

He has represented England at both Under-15’s and Under-16’s level.

The news was broken by ExWhuemployee on Phoenix FM West Ham Way radio show on Wednesday.

Wilson-Esbrand is probably unknown to the vast majority of West Ham fans so it difficult to pass judgement as to whether we are losing a potential star but just as many youngsters come from top-six academies in the other direction to get a better chance of first-team football than they would get in a top-six youth setup. The prime example of that is Declan Rice who left Chelsea’s academy to join West Ham and made his own piece of Premier League history.