Posted by Sean Whetstone on October 31, 2017 in News, Whispers 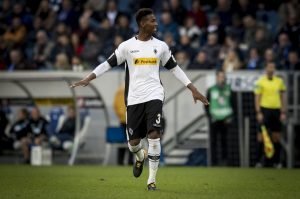 Hammer Reece Oxford was given his first Bundesliga debut for replacing captain Lars Stindl in Borussia Mönchengladbach’s 3-1 win at Hoffenheim.

Though the game was essentially won by the time the 18-year-old made his appearance at the Wirsol Rhein-Neckar Arena, it was nevertheless an important step for the West Ham defender.

The highly-rated centre-back started both of Gladbach’s games in the Telekom Cup this summer, as well as friendlies against Nice, Nürnberg and Malaga – scoring his first goal for the club in the latter.

Oxford, who arrived on loan in July, will now be gunning for his first Bundesliga start as Gladbach look to build on their victory in Sinsheim, where they became the first club to beat Julian Nagelsmann’s side since May 2016.

Reece tweeted “Bundesliga Debut !! Good team performance from the boys and well deserved win. Onto the next”