Posted by Sean Whetstone on December 6, 2021 in News 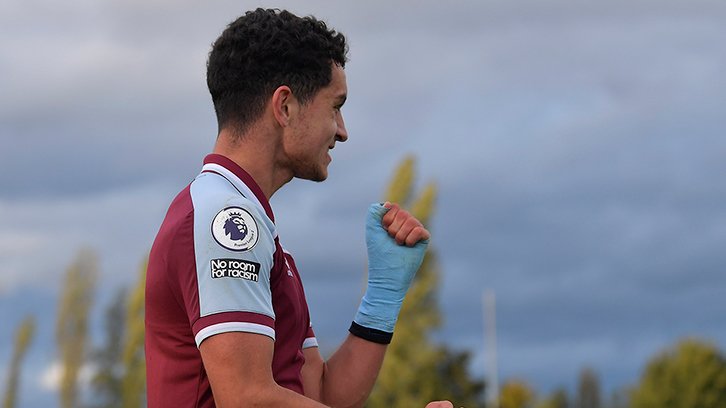 West Ham youngster Sonny Perkins has been shortlisted for the Premier League 2 Player of the Month award for November.

The 17-year-old forward netted three times for the development squad in a month which culminated in his memorable first-team debut away at Rapid Vienna in the UEFA Europa League.

Starting the month with a clinical brace in a 3-0 win over Liverpool U23s, Perkins also went on to score the match-winning goal against reigning champions Manchester City U23s at Rush Green Stadium.

As well as scoring for England U18s against the Netherlands, the teenager came close to scoring with his first touch for David Moyes’ first team in Vienna, only to be denied by a fine save late on.

The other nominees for November’s award are: Folarin Balogun of Arsenal; Ziyad Lakerche of Fulham; Luke Plange of Derby County; Jesurun Rak-Sakyi of Crystal Palace; Jon Rowe of Norwich City; Thierry Small of Southampton; and Harvey White of Tottenham Hotspur.

The shortlist was decided by the Premier League Football Development Panel after Premier League 2 club coaches nominated the best performance by an opposing player in each of their league matches in the month. The Panel will also select the winner.

They will be looking to emulate Manchester City’s James McAtee, Aston Villa’s Caleb Chukwuemeka and Spurs’ Dilan Markanday in winning a monthly PL2 award in 2021/22.

Perkins’ nomination for the Premier League 2 Player of the Month award marks a second successive nod for a Hammer this season, after Jamal Baptiste was nominated for October.