Hammer off to Oxford 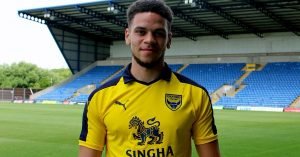 Hammer Marcus Browne has agreed a deal to join League One club Oxford United on a season-long loan.

The attacking midfielder Browne made his Hammers debut and sole first-team appearance when he featured against Romanian side Astra Giurgiu in a UEFA Europa League qualifier in August 2016. He was later loaned to Wigan Athletic, appearing in the Latics’ FA Cup fourth-round defeat by Manchester United at Old Trafford in January 2017.

Browne, who joined West Ham at the age of eight before working his way up through the Academy of Football ranks, captained the U23s last season, scoring six goals and registering two assists in 13 appearances.

Oxford Manager Karl Robinson said: “He has so much to offer. He is technically very good, he sees a pass and will score goals so he is very talented and we know there were a lot of clubs chasing him.

“He came along and we showed him the stadium, the pitch, the training ground and talked to him about the way we play and what our aims are for the season and I am absolutely thrilled that he chose to come here for the next part of what I am sure is going to be a fantastic career. I think our recruitment has been good all summer and hopefully we’re not finished yet.”