Posted by Sean Whetstone on February 29, 2020 in News, Whispers 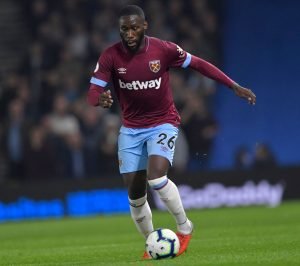 Arthur Masuaku has recovered from a mystery illness, trained this week and is available for selection for the matchday squad.

The Hammer missed West Ham’s defeat time Liverpool on Monday night through illness.  The 26-year defender had travelled to Anfield with the first team but was not announced in the Moyes 18 man matchday squad.

Masuaku hasn’t been one of the best performers this season so the manager would have been forgiven by supporters for dropping him for selection reasons. The left-back has made 15 Premier League appearances this season picking up a red card in the game against Aston Villa.

He was often excluded from Manuel Pellegrini’s matchday squad earlier this season leading to speculation that the two had a bust-up. In July last year, Pellegrini handed the DR Congo international a new contract extension keeping him with the club until 2024.

Masuaku joined the Hammers from Olympiacos in August 2016 on a four-year contract for a £6.2 million transfer fee.

The left-back has made 15 Premier League appearances this season picking up a red card in the games against Aston Villa.
Permalink