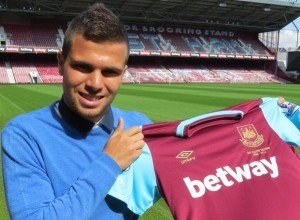 West Ham signed the highly-rated Serbian last summer from OFK Beograd. He has been capped by his native Serbia throughout the age group and Belic became the youngest player to feature in Serbia’s top division as a 16-year-old in April 2012, a record which he holds to this day. The 19-year-old Serbia international signed a one-year deal with the option of a second.