Posted by Sean Whetstone on June 3, 2019 in News, Whispers 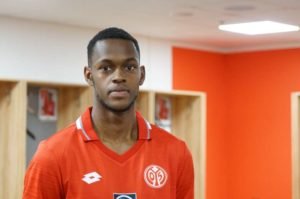 Edimilson Fernandes has joined German Bundesliga club 1. FSV Mainz on a permanent transfer for a fee believed to be nine million Euros (£8m).

The Switzerland midfielder departs West Ham United after three years in east London, having joined the Hammers from Sion in August 2016. Fernandes totalled 48 first-team appearances across his first two seasons at London Stadium, scoring a solitary goal in an EFL Cup win over Chelsea in October 2016.

The 23-year-old midfielder was on loan to Fiorentina this past season and has signed a four-year contract with the Mainz until 2023.

Fernandes featuring in 33 matches last season and notching two goals and two assists for Fiorentina. The right-footer has also made eight appearances for the Swiss senior national team.

“Edimilson Fernandes is a box-to-box player with a strong background in football, who is strong on offence as well as defence—something he has proven at the highest level in both the Premier League and Serie A. His athletic ability, positive outlook and age all make him a great fit for our central midfield. He is still able to develop himself further in order to reach his full potential,” said Mainz 05 sporting director Rouven Schröder.

“Edimilson Fernandes will strengthen our midfield straight away with his strong physical presence, his agility and his good technique. His strength in challenges as well as his desire to always win the ball and then to put his team on the front foot will allow him to fit into our system perfectly. Edimilson is a complete midfielder who we want to raise to another level here in Mainz,” said Mainz head coach Sandro Schwarz.

“Mainz 05 work very seriously and are well known for developing young talent and giving them a chance to improve. I will work hard to do the same. I’m now excited for the challenge of playing in the Bundesliga and to play in front of the Mainz fans,” said Edimilson Fernandes.