While the World Cup qualifiers are dominating the TV, it’s worth looking ahead to the summer, when England will play the Czech Republic in the European Championships.

The two sides have been paired in a tricky looking group that also includes the beaten World Cup finalists Croatia and Scotland. 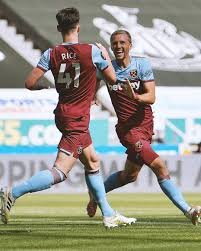 And that means we’ll see two Hammers taking on at least one other Hammer in the group stages!

Tomas Soucek and Vlad Coufal are both key for the Czechs and have been performing well over the international break, with their side beating Estonia, holding Belgium to a very creditable draw and then losing to Wales.

Declan Rice is indispensable in the England midfield, and has undoubtedly grown into the best defensive midfielder the country has to offer right now. Jesse Lingard played against San Marino and could also be included in the Euros XI if he keeps up his incredible form since his loan move from Man United.

And the four could all be on the same pitch in June.

It will be an interesting battle, particularly given that Soucek is the more advanced midfielder, capable of getting in the opposition box and causing havoc, not least scoring goals.

Rice will likely be given the task of keeping him quiet.

This season, the two have dovetailed beautifully in the Hammers midfield and they will know each other inside out by know. It will make for an intriguing battle of styles and attributes, as Rice reads the game so well, but Soucek has that power to just bulldoze his way through.

It’s rare for Irons fans to watch on and see two of our own making a genuine imprint on international tournaments but it’s almost guaranteed that whoever wins the battle will be contributing to a win for their country.

If Soucek, and Coufal down the right flank, come good, the Three Lions may well be tamed.

But we all know Dec and how good he can be; he can prove it in an England shirt by keeping Soucek quiet, and that’ll surely be the hope for a lot of English Irons!

Given that it’s the third game of the group stage, it could decide who goes through too; so let’s hope both England and the Czech Republic – our second team at the tournament! – have six points by the time they meet, with safe passage already secured.

Then the game might be a little friendlier than if there’s Euro glory on the line!