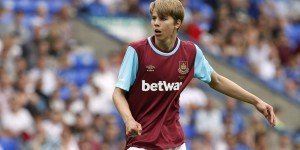 Hammers Martin Samuelsen has pulled out of international duty with Norway’s under-21s due to illness. Samuelsen was in line to make his seventh and eighth appearances for the Norwegians, who face Italy in a friendly later this week and Israel on Tuesday in a European Championships qualifying match.

But the West Ham player who is on loan to Burton Albion has missed the last couple of matches for the Championship because of illness and has now returned to West Ham for medical tests.

The winger struggled after coming on as a substitute against Bristol City earlier this month and looked off the pace, with manager Clough revealing he has been bothered by what could be a recurrence of existing issues.

“He’s gone back down to West Ham to have some tests this week, and then we’ll know a bit more later in the week.”

Samuelsen underwent surgery to remove nodes from his throat last Summer with David Gold saying last July “Martin Samuelsen is expected to be back in training in the next few weeks having undergone surgery on his throat.”