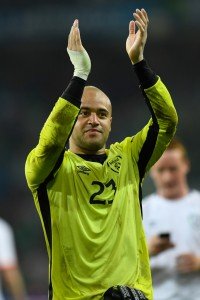 According to reports, West Ham goalkeeper Darren Randolph is poised to join Middlesbrough after they agreed on a £5m fee for his signature it is claimed this afternoon.

Sports journalist Pete O’Rourke who broke the news says the player will now undergo a medical before the transfer is completed.

West Ham will not stand in Randolph’s way after the arrival England international Joe Hart on a season long loan.

The 30-year-old made 22 appearances last season when he got his chance after a drop in form by Adrian, he has later replaced himself when he experienced a bad run of games and Adrian retook the Goal keepers jersey for the remainder of the season.