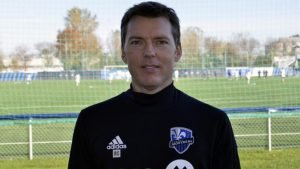 The Hammers have appointed Richard Collinge as the club’s new head of medical.

He will head up the sports medicine department under new manager Manuel Pellegrini.

In a statement on the official website the club said: ” A chartered physiotherapist with more than 20 years of clinical experience, Collinge has previously worked for a host of top-level football clubs, including Crystal Palace, Watford and Cardiff City, MLS club Montreal Impact and the Scotland senior men’s national team.”

And the 41 year old commented: “I am looking forward to starting my new role as Head of Medical at a Club as huge and steeped in history as West Ham United,”

“The start of pre-season when I get the chance to meet the staff and players cannot come around quickly enough.”

Collinge began his career as a youth-team physiotherapist with Crystal Palace nearly 20 years ago, combining his work with his studies at St Mary’s Hospital in west London.

He will  begin work with the Club’s injured players at Rush Green on Monday.