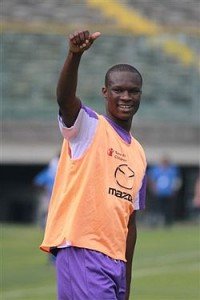 West Ham were among three clubs who sent a scout to watch Modena 20-goal top scorer Khouma Babacar at the weekend.

The player has now returned to his club Fiorentina since but Irons scout George Dixon was inside the stadium to watch the player.

The three watched the Serie B game end in a 1-1 draw before the Modena club twitter account alerted the world the trio were at the game!

Babacar has spent the last two seasons out on loan first with Padova in 2012/13 when he scored  just one goal from 16 appearances before bursting into life at Modena last term with 20 goals from 41.

One comment on “Irons join Man City…WBA on Babacar trail”