West Ham will have to overturn a 2-1 defeat if they are to reach the Europa League final after Eintracht Frankfurt won at the London Stadium on Thursday.

The Hammers had their moments against the German side but Frankfurt created the better chances and will subsequently take a 2-1 lead into the second leg. 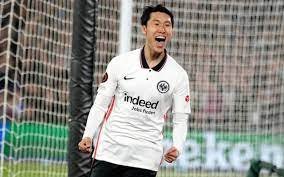 The Irons were actually a goal down within a minute, as Ansgar Knauff, who was a constant threat down the left flank, headed home from a sensational Filip Kostic cross.

On 13 minutes, it looked as though Jarrod Bowen would equalise when he was sent through one-on-one with Kevin Trapp, but his effort hit the goalkeeper’s leg and then smacked the post.

The Hammers were level on 20 minutes when Kurt Zouma headed on a free-kick and saw Mikey Antonio stick out a leg to turn it over the line.

In the second half it was mostly the Hammers creating chances but an incisive breakaway gave Frankfurt a 2-1 lead.

They broke quickly and Djibril Sow forced a good save from Alphonse Areola, but the ball dropped to Daichi Kamada, who poked it home.

The Irons then went close with a succession of efforts.

Said Benrahma hit the post with a long-range drive, before, with two minutes to go, Bowen headed over after an excellent cross from the Algerian.

In injury-time, Bowen hit the crossbar with a truly sensational effort, as he attempted a bicycle kick from 12 yards out.

It is an uphill task for the Irons to win in Germany, but they will have to do so if they want to reach the Europa League final.