West Ham Women will have fans in the stadium when they take on Arsenal in the Barclays FA WSL on September 12th, the club have confirmed.

The club have revealed that the game will be a test event for new supporters, following on from Brighton’s friendly against Chelsea that had 2,500 spectators last weekend. 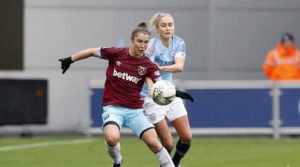 The Hammers’ women’s side play at Dagenham and Redbridge’s Victoria Road and there will be a capacity of 1,000 fans for the clash with the Gunners.

The event has been scheduled on the back of the government’s formal advice, and season ticket holders will be welcomed for the first time since lockdown.

This also feels like perhaps the first step to getting Irons fans back in the London Stadium for the Premier League, with the first game set to take place, again, on September 12th.

That will be against Newcastle and it remains to be seen how quickly there will be supporters available to cheer on David Moyes’ men.

The Hammers have confirmed, however, that any season ticket holder who does not wish to attend the game can opt out and not receive a ticket, in order to ensure their safety and that of other supporters.