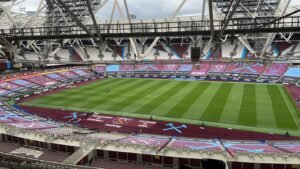 The Hammers penultimate home fixture against Watford will now be played at London Stadium on Friday 17th July at 8pm, with the match being broadcast live in the UK by Sky Sports.

West Ham’s away fixture to Old Trafford to face Manchester United is on Wednesday 22 July at 6pm screened by Sky Sports.

The Hammers will end the campaign at home to Aston Villa on Sunday 26 July at 4pm, with broadcast details to be confirmed at a later date.