Hammers could be denied promotion 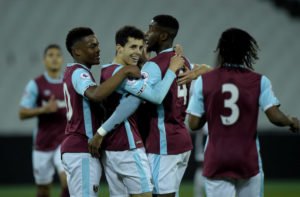 West Ham could be denied promotion to division one of Premier League 2 if the season is declared null and void with all results expunged. There will be no more U23 fixtures this season after the competition was abandoned on Friday.  West Ham is top of division two on 46 points after 19 games while Manchester United in second on43 points after 18 games.

West Brom are a long way behind in 3rd spot with 34 points after 16 matches.

Usually, the top two teams are promoted to division one with relegation of the bottom two of falling down to division two.

“This decision, which is independent of any discussions regarding the resumption of the 2019/20 campaign for first-team football, has been taken to give Academy staff and their players an element of clarity at this challenging time.

“The curtailment will include all Under 9 to Under 16 games as well as the Under 18 and Under 23 competitions. The methodology for determining the final league standings and outcomes for the season will be decided at a future date.

“Additionally, it is intended that any fixtures for the 2020/21 Academy season will not commence any earlier than would usually be expected. The decision has been made with the support of the EFL, which oversees the programme for Category Three and Category Four Clubs (Under-9 to Under-18).”

3 comments on “Hammers could be denied promotion”