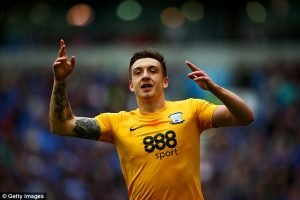 West Ham is rumoured to be having a look into hijacking a deal for Preston’s Jordan Hugill which Crystal Palace have been after for some time.

Preston North End striker Jordan Hugill was left out of their squad to face Nottingham Forest amid increasing interest from Crystal Palace.  The Eagles were reported have made a £8million move for the striker earlier on Tuesday, before Preston released a statement to the contrary.

It read: ‘Despite wholly inaccurate reports in a national newspaper this morning, we have not agreed any transfer fee with any club for Jordan Hugill.’

A tweet from the club said: ‘We can confirm Jordan Hugill was available for selection this evening, but given recent speculation regarding his future the manager decided a team fully focused on the game was what would be needed for the match.’

A bid of £10 million from the Hammers could seal a deal for the striker who Preston’s top goalscorer. Moyes previously managed Preston North End and is said to have many old friends there who could void for Hugill’s ability.

12 comments on “Hammers could hijack deal for Palace target”