Hammers could raise €45m from sale of two players 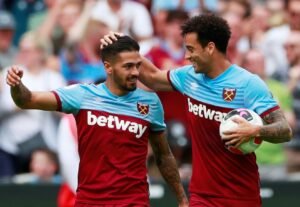 West Ham could raise €45m from the sale of two players according to one prominent football agent.

The agent who didn’t want to be named has suggested that Felipe Anderson is worth about €30m (£27m) in the current transfer market with Manuel Lanzini valued at €15m (£13.5m).

The sale of those two players could bring in £40.5m for David Moyes to re-invest this summer should sales of both players be possible this summer.

West Ham paid around £34m for Anderson and £10.8m for Lanzini so the net loss could be restricted to just over £4m.

The biggest stumbling block is their Premier League wages but insiders believe there will a market for both of them somewhere. A club insider has described the summer transfer as ‘Soft’ with little interest in West Ham players to date.

The only one bid was for Albian Ajeti from Celtic with the player asking for time to mull over his future.