Hammers could return for Bernard 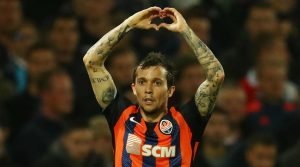 Daily Mail journalist Lee Clayton caused a stir on social media this morning when he posted on Twitter  “West Ham growing increasingly confident of signing Bernard, Brazilian international and another attacking wide player. I think that’s known as going for it.”

West Ham were initially quoted £200,000 per week wages by his agent back in June which immediately cooled the Hammers interest but they could still make a late move for the free agent on reduced personal terms as long as he can also fulfill the role of a back-up striker in case of injuries.

A club insider told Claret and Hugh this morning in response to Clayton’s post “It depends on whether Bernard can pay as a striker in an emergency, Manuel Pellegrini is thinking about it. In reality we are running out of time though”

Bernard was released by Shakhtar Donetsk in June and as a free agent and he’s seen as an attractive prospect to both Chelsea and AC Milan who are said to be keen on securing the services of the 25 year old Brazilian winger.

← Poll Result: Should Kouyate have been allowed to leave?
Pellegrini could dip into loan market →
Click Here for Comments >

2 comments on “Hammers could return for Bernard”