Hammers defender could be on his way this summer 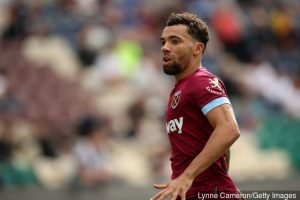 Ryan Fredericks could be among those players who will be allowed to move on this summer should the club receive the right offers.

However, it’s questionable how much the Hammers would get for their free signing from Fulham in 2018.

With Jeremy Ngakia now having stakes a serious claim for the right back spot and the hugely impressive Ben Johnson recovered from injury, Fredericks could become surplus to requirements.

And given his injury record and hit and miss form the club may well decide to go with the youngsters for the new season – whenever that  gets underway again.

Ngakia has been the discovery of the season and Johnson has long been recognised as the next big prospect to emerge from the academy.

David Moyes is likely to have a lengthy break in which to make some transfer market decisions but Fredericks has to be a possible to join the likes of out of contract Carlos Sanchez and Pablo Zabaleta.

Both Albian Ajeti and Arthur Masuaku are others who will possibly have question marks hanging over them.