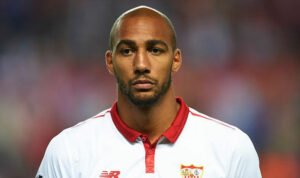 Speculation that David Moyes is trying to bring in Steve Nzonzi from Roma was described this morning as “virtually certain NOT to be the case.”

The report appears in The Sun where journalist Alan Nixon claims the midfielder can move on loan from Roma who are currently fielding offers for the 31 year old with the Hammers leading the way.

However, Moyes – despite having been an admirer in the past – is highly unlikely to move tfor the player with the chances of it happening rated as no more than 5 per cent.

The French intermational has made 195 starts in the Premier League and has played in has played in Spain, Italy and Turkey since starting his career  with Blackburn Rovers and Stoke City.

Aston Villa have  also shown an interest  recently and he seems far more likely to end up in their claret and view than ours.

We were told by e mail from inside the London Stadium: “It’s barely a starter – no higher than fve per cent chance – the manager wants younger players. That’s virtually certain not to be the case.”