Posted by Dave Langton on October 24, 2022 in News, Whispers

West Ham eased to a 2-0 win over Bournemouth on Monday and climbed into top-half contention once again.

The Hammers had drawn with Southampton and lost to Liverpool in the last two games but were not tested to the same extent by the Cherries. 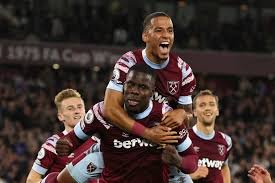 The Irons were much more comfortable and goals from Kurt Zouma and Said Benrahma proved decisive.

The Frenchman opened the scoring in the first half, on the stroke of half-time. The centre-back reacted quickest after Tomas Soucek headed towards goal, and flicked the ball into the back of the net.

Bournemouth felt Thilo Kehrer handled the ball before the goal, but VAR saw no reason to disallow the goal.

Benrahma added a second in injury time after Jordan Zemura conceded a penalty by handling Vlad Coufal’s cross, and the Algeria international stepped up to finish.

The game was largely a midfield battle for the 90 minutes, but Bournemouth were woefully short on quality and saw both their goalkeeper, Neto, and their main striker, Dominic Solanke, subbed off with injuries.

The Cherries did have one particularly big shout for a penalty when Ben Johnson handled in the area, but there was no VAR check and the referee played on.

The Hammers climb into 10th with 14 points.

5 comments on “Hammers ease to victory”