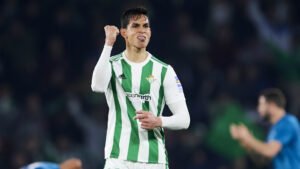 West Ham are reported to have enquired about the availability of Real Betis centre back Aissa Mandi despite Liverpool interest.

Liverpool are claimed close to signing the defender from the Spanish club with his contract set to expire next year.

However Spanish website Eldesmarque.com says Liverpool is not the only team in the Premier League interested with West Ham making an enquiry.

Another report in the Sunday Mirror claims Real Betis have told Liverpool to improve their £9 million bid for Aissa Mandi by £1.8 million if they want the centre-back this summer.

Mandi started to play football at the age of 8 at Reims. In 2010, he made his professional debut as a starter for the club in a Ligue 2 match against Le Havre AC.