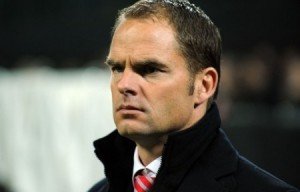 Frank De Boer- despite being hotly tipped as a big West Ham shout for manager – is not among the club’s front runners.

The Ajax boss’ odds were slashed from 33/1 to 9/1 today as fresh  stories emerged that he was very much in line for talks with the Irons.

But club insiders have revealed the  45 year old is seen as as a gamble given that the Dutch League is among the weakest in Europe.

Admitting there was an interest, our source revealed added that it would be “entirely wrong” to put him among the front runners.

He added: “Obviously he plays the kind of football very much associated with this club and has won titles in Holland but it’s not unlike the Scottish League. How much does that mean? It would be a gamble.”

However, despite the reservations, de Boer hasn’t been ruled out as the club continues its search.