Following the 2-0 victory against Everton at the London Stadium on Saturday afternoon, the Irons are celebrating their first league win since October. Manager David Moyes tactical re-shuffle relegated Tomas Soucek to the substitute’s bench although he did feature as a substitute.

The Czech Republic international has been a shadow of the player we signed from Slavia Prague, and put bluntly the team operates more cohesively without him. Lucas Paqueta performed admirably during Saturdays game at the London Stadium, but his was a performance of industry rather than flair. 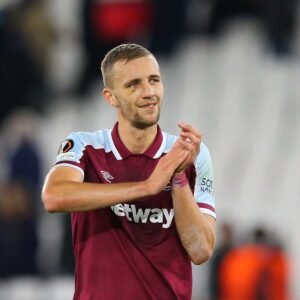 With the imminent departure of Declan Rice, it’s abundantly clear that a midfield duo of Paqueta and Soucek would be ineffective.

I believe that in Flynn Downes the Irons already have the ideal player to fill the midfield vacancy, but it’s clear David Moyes doesn’t share that opinion.

Samu Costa is valued at £21 million. Wolves held talks in the summer of 2021, but Costa chose to stick around at Almeria, who were pushing for promotion from Spain’s second tier at the time.

Since gaining promotion, Costa’s dynamic displays have not gone unnoticed. The Portuguese press believe that Almeria are already monitoring the market for potential replacements. West Ham have reportedly made their interest in the player clear following our recent poor form.

← Three lovely points as Ings signing sparks Mikey
Daws: “Thanks and I hope I have done you proud” →
Click Here for Comments >