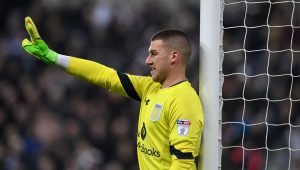 West Ham goalkeeping target Sam Johnstone will be ready to listen to offers in the summer after a highly succcesful loan spell at Aston Villa.

The goalkeeper – regularly tracked by the Hammers this season – has shown outstanding form and despite Villa being in pole position, the Irons are certainly not out of the race.

The stopper signed an extension two months ago but that was done to ensure he didn’t leave United as a free agent without a fee being involved.

He is valued at around £5 million but the Hammers could be expected to outbid Villa on personal terms should it come to a head to head.

‘I only have a year left on my contract. I am just enjoying my time here. I’m concentrating on Villa at the moment.

‘It’s just a case of waiting, hopefully get Villa promoted and then sit down in the summer – hopefully after a few holidays – and see where I’m at. I want to carry on playing football.’

The keeper was in superb form over the 90 minutes against promotion rivals Cardiff City on Tuesday evening when the 1-0 win came on the back of a string of saves from him.