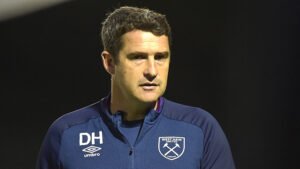 West Ham face their toughest test of the season tomorrow as they bid to haul themselves to the Premier League 2 Division 2 safety zone.

After a five match unbeaten run they have lifted themselves off the bottom with Southampton taking their place at the foot of the table.

But tomorrow they face Manchester City who were confirmed as Division 1 champions for the first time in their history on Monday night, having moved ten points clear of second-placed Blackburn Rovers with just three games left to play.

The size of the task facing the Irons is demonstrated by City having  scored 68 goals in just 21 matches  while conceding just 28.

However the Hammers have taken eleven points from a possible 15, including a 2-1 win over Everton on Monday afternoon.

Lead Hammers coach Dmitri Halajko said: “It’ll be the toughest test we’ve had yet, but we’re in good form going into it, so hopefully we can bring all of the good bits from our last five games into it.

He told whufc.com: “Obviously the toughest test of the season is Manchester City at the moment. They’ve been runaway leaders at the top of the league, and they’re champions now, so it’s going to be a really tough game.

“We played them away last month, and they were better than us on that day by quite some way in the end. We weren’t at our best, but they did really capitalise on that. They’re very dangerous and good on the ball, but also their final third play is so clinical.

If we can do that, it should be a close game.”

With three league games of the season left to go, the Hammers currently sit in 12th place, just behind Leicester City on goal difference.

Back-to-back fixtures against Arsenal ultimately conclude the U23s’ domestic season, and Halajko wants to see his players keep up the positives during their season run-in – starting with Friday’s test against City.