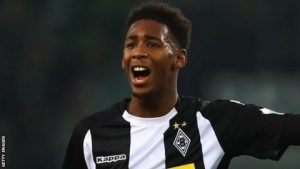 Reece Oxford may find himself in a summer ‘wilderness’ as his Borussia Monchengladbach becomes less certain.

David Moyes was happy to allow the teenager a German return after taking a look at him during the month ‘s winter break when, after injury, he failed to impress in the FA Cup against Shrewsbury or Wigan.

Borussia had been desperately keen for him to return but the defender has only made three appearances in the first team since and received one yellow card after starting to establish himself before his recall to West Ham.

Borussia had even tabled a £10 million offer which had been turned down but the Hammers who were looking for closer to £15 million.

Now he has just six games of the season left to make sufficient impact with mid table Gladbach for the German outfit to seek an answer on the £10 million or improving  their offer.

And ClaretandHugh was told: Given the interest earlier we are surprised at the lack of game time Reece has had and there have been no further talks.”

At the time of his return it was reported that the defender had been disappointed not to remain at the club and his disappointing performances with the Irons left the club with little alternative than to allow him to continue his development in Europe.