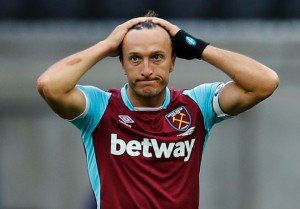 West Ham are likely to be waiting several days before the first team squad make a collective decision on whether they will  accept a 30 per cent pay deferral as a consequence of the current situation.

Claret and Hugh can reveal that there can be no immediate response from the squad following skipper Mark Noble putting the Premier League chairmen’s proposal to them yesterday(Fri).

That’s essentially because the squad can’t  come together to discuss the situation  and the conversations on their positions have so far had to be discussed at the end of telephones.

However, CandH has learned – through one player – that they are all aware that the squad are aware of mounting pressure  from the public and members of government.

But getting a quick collective decision on such an important issue with – in one or two cases interpreters required – will take a few days to sort out.

Our source believes that a decision could take anything up to a week with Mark Noble deeply involved in trying to help find the solution.

One comment on “Hammers forced to wait for players pay decision”