Hammers get a Liverpool boost 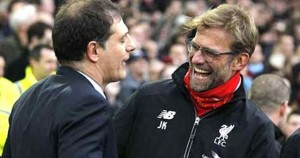 Liverpool manager Jurgen Klopp has today confirmed that both Sadio Mane and Adam Lallana will miss the clash with the Irons on Saturday evening.

The Reds will be aiming to build on their 3-0 victory over Huddersfield at the weekend with the Hammers aiming to make amends in a big way after being hauled back by Palace and thrashed by Brighton.

They will be hoping for the sort of performance – in both haves –  they turned in against Spurs at Wembley as they bid to turn around a deeply depressing series of results.

It’s positive news that Lallana and Mane will be missing from the clash with both players out injured.

While this had been expected, Jurgen Klopp has confirmed as much this evening

Meanwhile the Irons are awaiting news on their injured defenders, Fonte and Reid with Pablo Zabaleta definitely missing the match through suspension after his five yellow cards this season.

← Slaven Bilic remains on thin ice
Carragher slams Irons and the fans agree with him! →
Click Here for Comments >