Nayef Aguerd looks certain to be available to the Hammers for match at Arsenal on Boxing Day.

The central defender was a very late withdrawal from the Morocco side which met France in the World Cup semi final last night after being named on the initial team sheet. 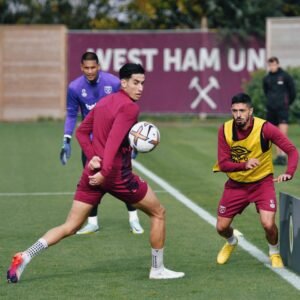 That immediately raised fears that he had been pulled out of the squad as a result of his thigh injury which he picked up in the game against Spain late in the game,

Had he played with that being the case it could easily have aggravated an injury which takes  between one and three weeks to heal.

There had been real worries inside West Ham that he could be rushed back too quickly but the Moroccan team chief  Walid Regragui has revealed that it was not that but a flu bug that had caused the problem.

And that of course is great news for the Hammers.

““Nayef was recovering from flu and wanted to play as well, I thought it was best to play with three defenders so they didn’t have too much to run at…” Regragui told The Independent.

“I have no regrets about the decision. Nayef’s absence was difficult and all of these little things meant we got off to quite a poor start, you learn from your mistakes, I do as well. If all our squad was fit we could have caused them even more problems.”