Hammers get ‘lenient’ ref at Watford 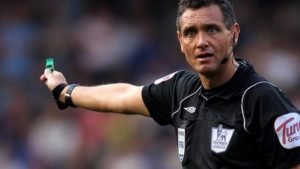 The west midlands official is one of the most lenient in the Premier League this season having handed out only 24 yellow cards in 11 games this season – one of the lowest tallies in the top flight among its 18 officials this campaign.

He was once seen as among the Premier League’s more error-prone officials – memorably sending off Kieran Gibbs instead of Alex Oxlade-Chamberlain for Arsenal in 2014.

He has shown only one red card this season, to Jonjo Shelvey for a stamp on Dele Alli on the opening weekend of the season,

2 comments on “Hammers get ‘lenient’ ref at Watford”