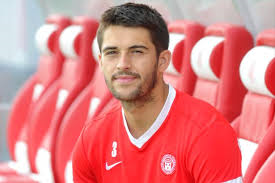 Reports suggest West Ham have had a £2million bid rejected for Hamilton left-back Stephen Hendrie. The Scottish 20-year-old is out of contract in the summer and is said to be attracting interest from a number of Premier League clubs including West Ham, Crystal Palace and Swansea. Hendrie has made more than 100 appearances for the Scottish Premiership club but has made it clear he is ready to move to a bigger club. He is seen as cover for Aaron Cresswell.

Speaking before his 20th birthday in January Hendrie said: ‘I’m 20 next week, I don’t think that’s too young or too old to move from Hamilton.I’m a Celtic fan and obviously the Premier League is one of the best leagues in the world. That’s my dream – you want to reach as high a level as you can and if I can get to the Premier League that would be brilliant. But the Accies would need to see if it’s the right offer. If it is, they say they’ll never stand in anybody’s way. They are a great club like that. If they accepted it, there is not much I could do. It’s good massive clubs are getting mentioned. But I just want to get my head down and keep doing well.Just now, the Accies are flying and I’m loving every minute of it. We just want to finish as high as we can.”