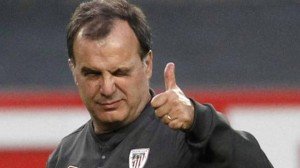 Marcelo Bielsa is understood to be at the top of the Hammers wanted list should the board be forced to sack David Moyes – possibly after the next three games.

Everton’s draw against Manchester City yesterday saw Frank Lampard’s outfit go a  point ahead of us and left the Hammers languishing in 17th place.

Wolves remain a point behind us and should Forest beat Chelsea today that will push us into the relegation area .

Ironically we play Bielsa’s former club Leeds in our next game whom he pushed back into the Premier League.

He was also interviewed for the Hammers job at the time Slaven Bilic was eventually appointed and it may have been his lack of English which decided the board against him.

Now the Daily Mail are claiming that should we eventually replace Moyes he will be one of three the club are looking at.

Mauricio Pochettino and Thomas Tuchel also feature on the West Ham owners’ three-man shortlist of possible replacement for the Scot, should they decide to part ways with him.

The first two names may well be slightly ambitious but Bielsa would be the most realistic shout. He certainly has real pedigree in the game.

And if it’s attractive football that the Hammers fans want, the ex-Leeds boss is the man for the job.

One comment on “Hammers have three managerial names on shortlist”