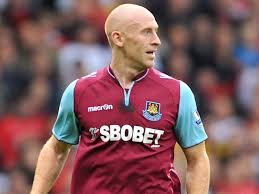 With Andy Carroll having suffered an injury in training, manager Sam Allardyce started with Enner Valencia up top.

Morgan Amalfitano  was played in an advanced role with Mark Noble and Kevin Nolan coming in as expected.

The game settled into into a nice tempo from the start and the Irons first chance came when Matt Jarvis clipped in a cross for Winston Reid to head wide.

Everton went straight to the other end and a Lukaku drive was  spilled by Adrian but Reid was on hand to clear before Jenkins crossed for Jarvis who flicked goalwards but with little pace for keeper Robles collected.

Although the Irons were dominating possession, the home side looked the more dangerous going forward and Naismith had Adrian scrambling as a 25 yard shot flew wide.

Barkley then released Lukaku but his powerful shot too flew wide. Naismith pushed forward again but saw his shot from a tight angle fly across the face of goal.

Everton had yet another outstanding chance when Miralles fired a wicked cross to the far post but Coleman just failed to get a touch.

At the other end Amafitano fired over the top before Reid, who had performed well at the heart of the Hammers defence thwarted Lukaku from close in.

The Irons started the second half with a rattle and Robles was forced to save well when Jenkinson galloped forward and unleashed a fierce drive.

But on 56 minutes the Hammers produced a clasic training ground set piece when from Amalfitano’s outswinging corner saw Collins arriving at the near post to crash home a brilliant header.

The home side responded well but for all their forward movement and the constant Lukaku threat they could not create a real chance.

Valencia could have added to the lead when his header from Noble’s fine ball in was palmed over the top by Robles.

Manager Allardyce adopted a “what we have we hold” approach bringing on Cole for Valencia and Poyet for Jarvis but Lukaku was to have the last word deep into four minutes of injury time.

The huge striker arrived in the box tolas him from six yards from Oviedpo’s cross after the Hammers defence had failed to clear.

← Agent: “Sam may be trying to flush out an offer”
Allardyce hits out at Valencia miss →
Click Here for Comments >