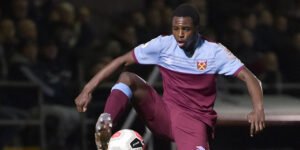 Promising Hammers right back Jeremy Ngakia has refused to sign a new deal with the club and will walk away from the London Stadium on June 30.

Everybody at the club feels badly let down by the 19 year old’s decision under the guidance of his agent David Dixon of Player Works  after months  of negotiations but the player and his representatives didn’t give their answer until last night (Thurs).

However, the decision does clear the  way for another brilliant prospect Ben Johnson to challenge fit again Ryan Fredericks when the season resumes although the youngster  has been hit by injuries on a regular basis.

The Hammers had  made various offers to Ngakia as they had done Johnson and Grady Diangana before him but eventually the youngster decided to reject them  through Dixon.

It will come as no surprise now of course if the player joins a new club in the near future.

It means of course that he will not be around to complete the renewal of a season which is scheduled to kick off again on June 12th or 19th which seems a harsh manner in which to conduct the business.