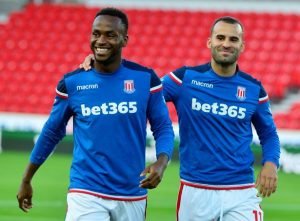 Stoke City boss Paul Lambert has been hit by a couple of desperate disciplinary situations which has seen him lose his main strike force for the clash with the Hammers on Monday evening.

Spanish striker Jese Rodriguez has been banished from the squad  after failing to turn up for training two days on the trot this week .

Meanwhile Saido Berahino is training with the club’s under-23s after himself turning up late for training the day before the trip to Arsenal on April 1 – and then turned up late for an under-23 game the day after the Arsenal match.

Rodriguez, 25 , has missed training over the two days after apparently remaining AWOL in Spain.

The club are waiting to see if he emerges when the senior squad is due to report back on Saturday after a day off on today.

However, both players are now reported to have been excluded  from the Stoke squad for the trip to the London Stadium.

One comment on “Hammers hopes boosted by Stoke ‘bad boys’”