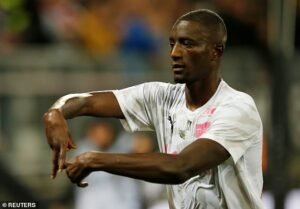 West Ham are reported by Sky to be in talks with Ligue 1 side Amiens over a loan deal for their striker Serhou Guirassy.

Amiens have been hoping to get a permanent deal sorted but the Irons are refusing to pay fees when there is a chance of a loan deal given their experience with Albian Ajeti and Jordan Hugill.

Amiens are now prepared to let him leave on loan with an option to buy in the summer and to be fair the player has attracted interest from Leicester City and Villa.

The 23-year-old French forward joined the Ligue 1 side from Bundesliga club Köln in a £5m deal last summer.

Guirassy has scored four goals this season with Amiens sitting 18th in Ligue 1.

ClaretandHugh says: It doesn’t sound the most exciting deal in the world should it happen and although a striker is needed we still believe all our energies should be centred on that powerful midfielder. The Hammers believe Joe Allen is past his best and David Moyes has been looking at a series of younger players in preference. However, should they fail, don’t rule out a move for the Stoke City 29-year-old. Little is known about Guirassy other than him starting with FC Koln before moving to Amiens after suffering some medical problems. He was loaned until the end of last season before the club exercised an option and bought the rights for Guirassy. Transfer fees were reported to be about 5 to 6 million Euros. Amiens later took advantage of the option and turned the deal permanent. He has a scoring record of 15 goals in 67 games at the two clubs and has represented France at under 17, 18 and 19 level.