Posted by Dave Langton on December 12, 2021 in News, Whispers

Aaron Cresswell will not play against Burnley on Sunday, according to Football.London.

The left-back has continued to struggle with the back injury he sustained against Manchester City, when he slid into a post. 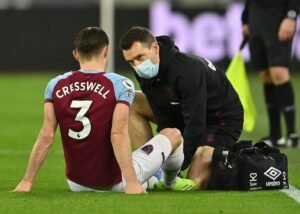 And Football.London now reports that the full-back has not travelled to Turf Moor for the clash with Sean Dyche’s side.

Cresswell was also absent from the draw with Brighton and the win over Chelsea.

It remains to be seen who will replace Cresswell but the options appear to be either Arthur Masuaku, who scored that amazing winner against the Blues last weekend.

Cresswell will be hoping to return in time for the midweek clash with Arsenal, but the Burnley game appears to have come too early for the 31-year-old.

A win for the Irons on Sunday would move them onto 30 points in fourth, six points behind Chelsea in third but three clear of Manchester United in fifth.