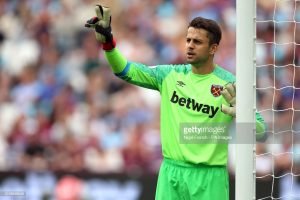 A club insider told Claret and Hugh that their absences were purely precautionary and they should be the available selection for this Saturday for the Betway cup and again the following Saturday when the Premier League kicks off.

Winston Reid was again rested and was a planned absentee as medical staff phase his return after such a long lay off from a knee operation. He should also return to the matchday squad this Saturday.

A surprise new injury was Fabaisnki was named in the starting XI against Hertha Berlin only to be replaced five minutes before kick-off with Roberto.

Fabianksi felt something in his groin and was rested as a precaution so it is not expected to be serious and he is expected to return before the start of the  Premier League season against Manchester City,

Xande Silva has just returned from Portugal after recovery from an emergency bowel operation, he is expected to have a personal six-week programme one to one with a member of the medical staff before he can start his pre-season preparations.

Both Michail Antonio and Seb Haller appeared to receive small knocks during today’s game so it will be interesting whether this causes them to miss any training.