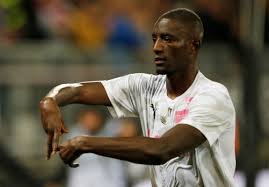 The Irons have been joined by Bournemouth and Brighton but Juventus, Atletico Madrid and Sevilla have all now expressed an interest in the 24-year-old.

The forward has been in outstanding form since he arrived from  Cologne in a £5million deal last summer, scoring nine goals in Ligue 1.

Intermediary Mark McKay is working on behalf of Amiens to sound out possible moves for Guirassy and the agent said: ‘A number of clubs in England and across Europe have shown an interest in Serhou after he performed so well for Amiens.

‘In the current climate due to the impact of the coronavirus pandemic clubs might not be able to pay huge transfer fees like they used to and in that respect Serhou could prove to be a bargain in this window.

‘Serhou’s preference has always been to play in the English Premier League, but Amiens will evaluate all offers that come in for him and make a decision from there.’

ClaretandHugh says: At a time when in general terms it’s far too early to start getting overly excited about targets this one sounds to have a bit of truth in it as far as the Irons are concerned. We base that on the agent concerned having been used at various times by the Hammers who is the son of of Willie McKay, a representative regularly used by the club before being succeeded by his son. The Hammers are most definitely in the market for a striker this summer although Jordan Hugill has a year left on his deal and could be used as a back up. However, if the report is correct in naming two or three European giants as being keen on the player we might be towards the back of the queue rather than closer to the front. Any move would also give us a clearer idea of the sort of fees clubs are likely to be paying this summer.

One comment on “Hammers join giants in chase for striker”