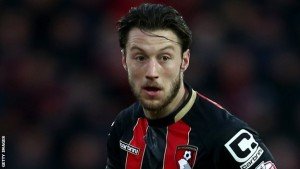 Arter  has started just 11 games out of the 26 in the Premier League this season and was left unused for the last five. He’s not a happy boy!

He is strongly fancied by manager David Moyes and the Hammers went in with a £15 million bid as the winter window opened but Bournemouth boss Eddie Howe immediately batted them away being unwilling to sell to a club he would have seen as a fellow relegation rival at the time.

Arter however made his displeasure known saying: “When a player my age is not playing and someone who is desperate and just loves playing football, there comes a question over whether long term it is going to the right place for me. Ultimately if I am not playing, there has to be a change.”

He was known to fancy a move to West Ham strongly and were the club to go back in a deal at around the £15 million could be done despite him having a contract until 2017.