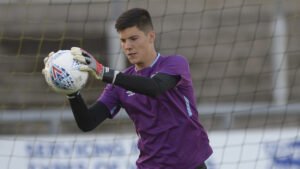 West Ham United U18s goalkeepers Krisztian Hegyi of Hungary and Daniel Jinadu of Nigeria are heading for the FIFA U-17 World Cup finals in Brazil on Saturday 26 October.

And there’s even the chance they may line up against each other with both nations being drawn in Group B.

The two sides will meet on the opening day of the competition in Goiânia, before matches against Australia and Ecuador round-off the group stage.

First-team Goalkeeping Coaching Xavi Valero said: “It’s great news that two of our Academy players will be taking part in the U17s World Cup. Tournaments like these are a big part of their development as goalkeepers.

“Krisztian  is the regular No

1 for Hungary, and Daniel has been selected as one of three goalkeepers for Nigeria.

I think Daniel has a chance to start for Nigeria, especially in the first game of the group against Hungary. That will be the Krisztian Hegyi vs Daniel Jinadu game and if that happens, it’ll be great news for the Academy and for the Club.”