Hammers knocked out on penalties

Posted by Dave Langton on November 9, 2022 in News, Whispers

West Ham were knocked out of the EFL Cup by Blackburn on penalties after a 2-2 draw on Wednesday, with Angelo Ogbonna missing the decisive spot-kick.

Rovers were excellent throughout the game and took the lead after just seven minutes, with Jack Vale scoring the opening goal after being sent through one-on-one with Alphonse Areola. 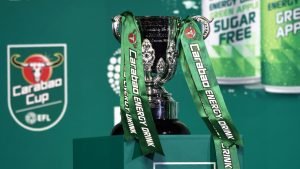 The Hammers did level proceedings after 35 minutes, when Mikey Antonio crossed to Pablo Fornals, who finished.

And it appeared as though the Irons were set to win the game, when Antonio scored in the 78th minute.

But Ben Brereton Diaz, a summer target for the Hammers, scored with just two minutes remaining, cutting inside and curling beyond Areola.

The penalties were perfect for the majority of the shootout, with 19 penalties taken in total.

Nine Hammers stepped up and scored but Ogbonna hit the bar to send Blackburn through, ahead of the Irons’ huge weekend clash with Leicester City.

← Areola named for Qatar..strophie!
Penalties? Game should have been buried long before →
Click Here for Comments >

5 comments on “Hammers knocked out on penalties”