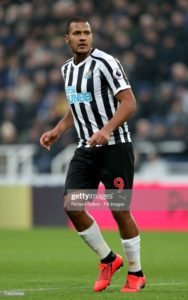 West Ham’s reported interest in West Brom’s Salamon Rondon will now rest on the reactions of Slaven Bilic and whoever becomes the next Newcastle United manager.

A permanent move to last season’s loan club Newcastle is on the back burner following the parting of the ways between United owner Mike Ashley and manager Rafa Benitez.

It also means that the widely reported interest in midfielders Jonjo Shelvey and  IsaacHayden will go on hold until The Toon decide their next managerial appointment.

Shelvey would be a less than 50 per cent chance anyway and the arrival of Pablo Fornals into the same category with a Hammers top source explaining: “It’s all very slow at the moment with players away.