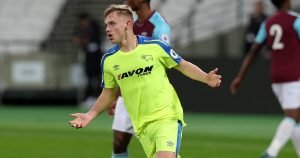 The Hammers are this morning being reported as tracking the highly promising 19 year old Derby County youngster Luke Thomas.

The teenager has been outstanding in the outfit which beat the Irons under 23s 1-0 in their last game and has been catching their eye for some time.

The youngster  has been in great form this season and recently made a couple of cameo appearaances in the Rams home wins over QPR and Bolton Wanderers.

Now, a host of Premier League clubs are said to be monitoring his progress, but we are believed to be leading the chase, say Gloucestershire love, the local paper to his former club Cheltenham Town

The Hammers are putting £5 million a year into their youth set up which has been producing such good results over the past two to three years.

Thomas joined Derby from Cheltenham Town in January 2016 for an undisclosed fee.